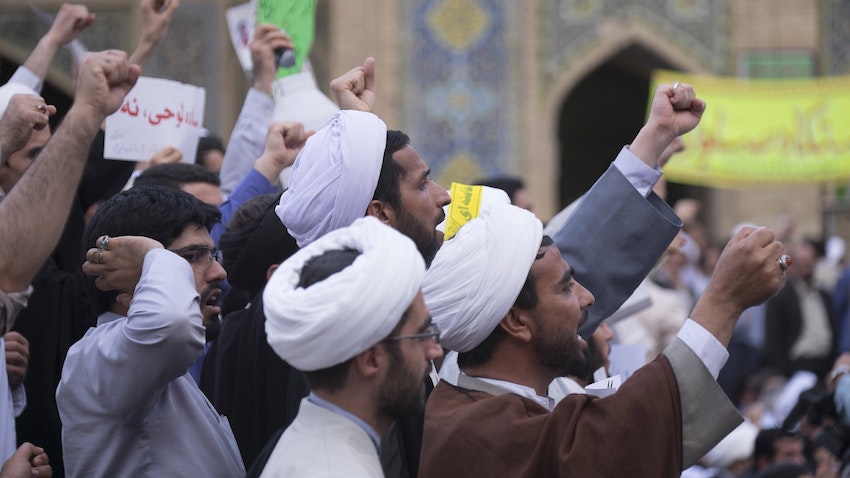 University students and clergymen protest in front of the Feyziya Madrasa in Qom, Iran on May 30, 2015. (Photo via Getty Images)

The crackdown on anti-establishment protests in Iran has led prominent Shiite clerics in both Iran and Iraq to call on the Islamic Republic to halt the violence and listen to popular demands. In particular, the execution of individuals detained in connection with the unrest has sparked criticism from high-ranking clergymen in the holy city of Qom, indicating a shift in relations between the seminary and the state.

The criticisms raised by clerics focus on what is denounced as an extremist reading of the Islamic jurisprudential notion of moharebeh. Essentially meaning “waging war against God,” the concept has been used as a legal basis for the issuing of death sentences in connection with the unrest, leading some to allege that there is an attempt to strike terror in the hearts of protesters.

Criticisms of the use of jurisprudential notions

Mohsen Shekari, a 23-year-old man detained during the recent protests in Iran, was on Dec. 8 executed on the charge of “waging war against God.” The execution triggered a major public backlash that came to involve senior clergymen. For instance, in the days after Shekari’s death, Ayatollah Mohammad Ali Ayazi—a senior member of the Assembly of Qom Seminary Scholars and Researchers—stated in an interview  that...