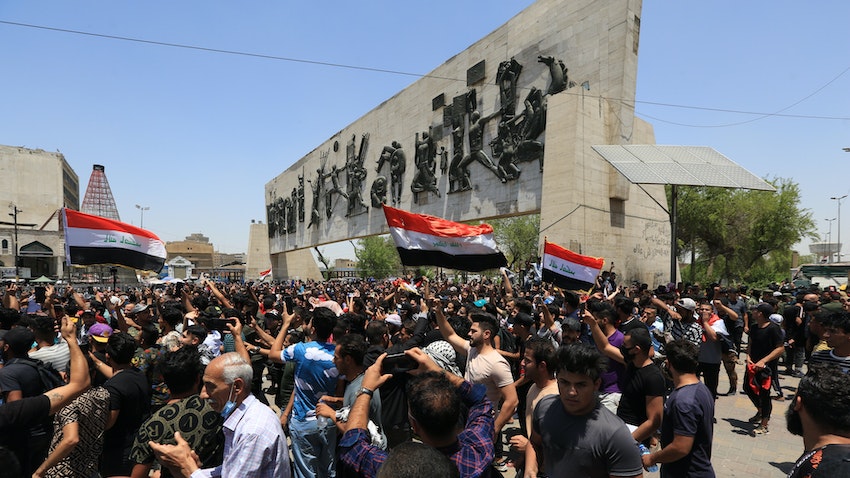 Demonstrators gather at Tahrir Square to protest against a wave of killings of activists and journalists in Baghdad, Iraq on May 25, 2021. (Photo via Getty images)

Press freedom and freedom of expression are once again under the spotlight in Iraq. The most recent example of establishment efforts to silence criticism is the case against renowned media personality Ahmad Mulla Talal and actor Iyad Al-Taie. Cheered by supporters, the two men victoriously exited a court in Baghdad on Apr. 10 after promising to cooperate with an investigation into a complaint against them filed by the country’s defense ministry. Three days earlier, they had been served two warrants for their arrest and interrogation under Article 226 of the 1969 Iraqi penal code. Those charged under the law face up to 7 years behind bars for publicly insulting public institutions or officials.

The warrants were issued after an Apr. 4 sketch by Mulla Talal on his TV show that featured Taie, depicting alleged corruption at the defense ministry. In a lengthy statement issued immediately, the ministry thundered that the satire “harms the reputation of the entire Iraqi army and erases all their sacrifices.” As Taie was dressed up as an officer, the ministry also accused him of impersonating a soldier—possibly causing confusion among viewers...