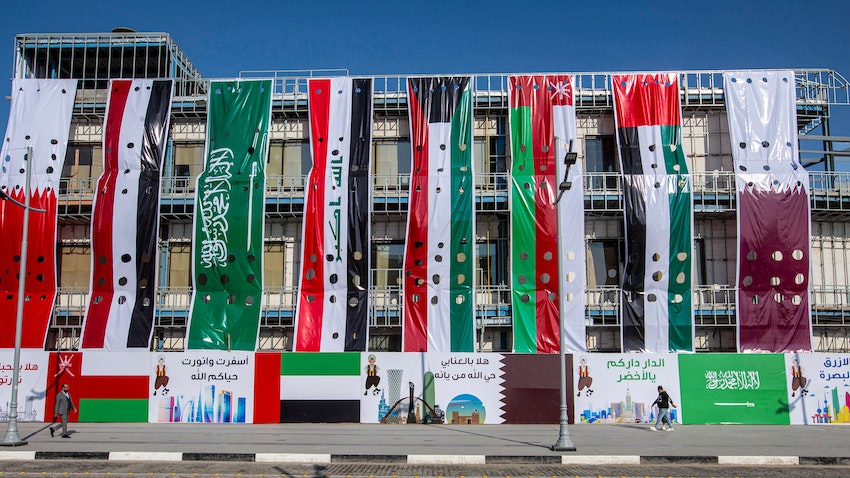 Banners of countries participating in the 25th Arabian Gulf Cup football championship are put on display in Basra, Iraq on Dec. 29, 2022. (Photo via Getty Images)

Iraq is about to embark on a new chapter in its sporting history. From Jan. 6-19, the southern city of Basra will host the 25th edition of the Arabian Gulf Cup (AGC), a biennial football tournament amongst Gulf Arab states first held in 1970 in Bahrain. Iraq will be the venue of a major international football competition for the first time since it both hosted and won the AGC in 1979.

Eight regional teams—Bahrain, Iraq, Kuwait, Oman, Qatar, Saudi Arabia, the United Arab Emirates, and Yemen—will participate in the tournament. Matches will take place at the Basra International Stadium and the Al-Minaa Olympic Stadium, venues with capacities of 65,000 and 30,000 spectators respectively.

Having been excluded from the tournament from 1990 to 2004—following its 1990 invasion of Kuwait—hosting this year’s edition marks an important comeback for Iraq. In Nov. 2019, the Arab Gulf Cup Football Federation announced Basra as host city, a sign of the country’s return to regional prominence.

Beyond the pitch, holding the tournament is an indicator of Iraq’s presently closer relations with previously distant Arab and Gulf neighbors. It is also an attempt by...