Will Sadr contain Iraq’s armed factions, work with the US? 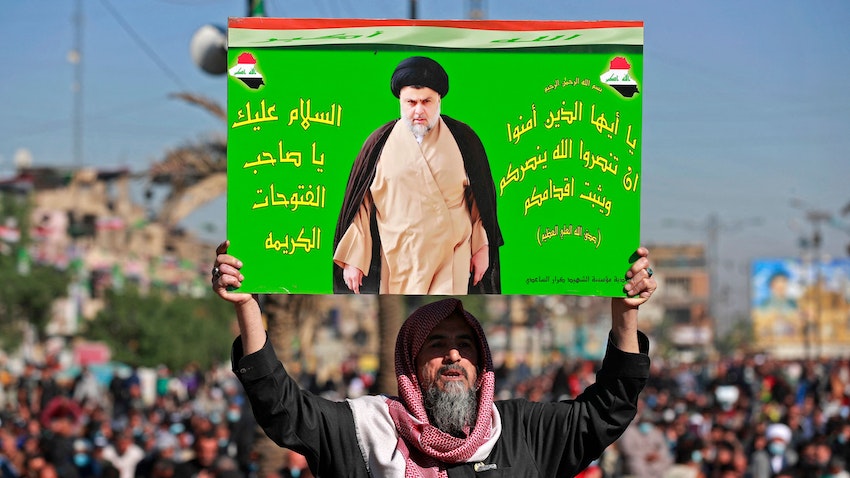 An Iraqi man holds a picture of Shiite cleric and politician Muqtada Al-Sadr during Friday prayers in Baghdad on Dec. 3, 2021. (Photo via Getty Images)

A political crisis has engulfed Iraq since the Oct. 10 parliamentary elections, which saw the Sadrist Movement become the largest single bloc in the legislature. By most accounts, the crisis has erupted over the Sadrist gains while the pro-Iran parties of the Shiite Coordination Framework mostly lost seats.

Protesting the validity of the election results, some members of the Coordination Framework have in past months led demonstrations. The protests have included significant participation from Asa’ib Ahl Al-Haq and Kata’ib Hezbollah, members of the Popular Mobilization Units (PMU) that operate as part of the Iraqi security apparatus. The two groups threatened violence to enforce their demands, but the federal supreme court nonetheless ratified the election results on Dec. 27. Still, questions remain over the makeup of the next government in Baghdad, necessitating an understanding of possible next steps by Shiite groups—and Iraq’s security situation.

Chaos did not engulf Iraq following the federal supreme court’s ratification of the election results. Rather, the parties that had threatened to respond to the ignoring of their demands ultimately acquiesced, surprising most experts and observers...