Demonstrations in Baghdad commemorate the assassination of Soleimani, Al-Muhandis 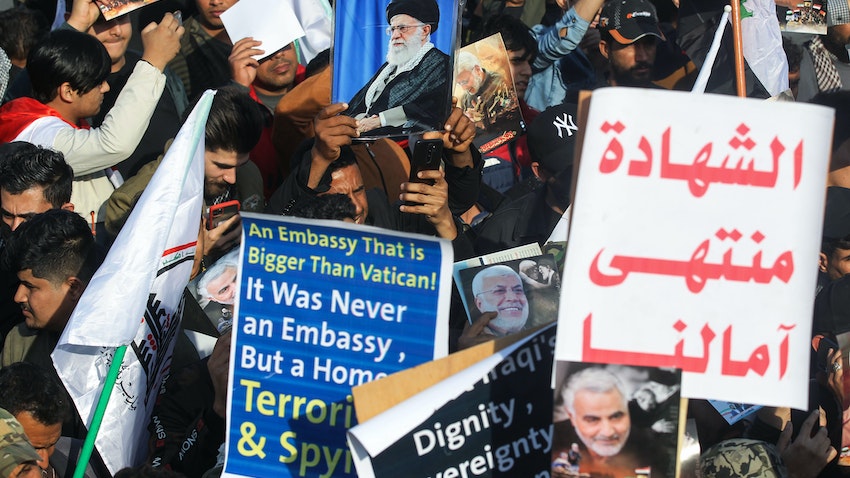 Iraqi demonstrators rally on the anniversary of the death of Al-Muhandis and Soleimani in Baghdad, Jan. 3, 2021. (Photo via Getty Images)

The story: Thousands of members and supporters of the Iraqi Popular Mobilization Units (PMUs) rallied in Baghdad on Sunday to commemorate the first anniversary of the assassination of Iran’s Quds Force Commander, General Qasem Soleimani, and the deputy chief of Iraq’s PMUs Abu Mahdi Al-Muhandis. The two were killed in a US drone strike near Baghdad’s international airport on Jan. 3 2020.  Demonstrators called for the implementation of the Iraqi parliament’s non-binding vote on Jan. 6 2020 to expel foreign forces from the country. They also raised pictures of Soleimani and Muhandis, while others gathered  near the location of the strike, where shrapnel marks are still visible on the asphalt and walls.

The coverage: The event saw wide media coverage from Iraqi and regional outlets. UK-based pan-Arab Azzaman reported the news highlighting US-Iranian tensions, and fears of a stand-off between the two sides in Iraq, where each has large influence...